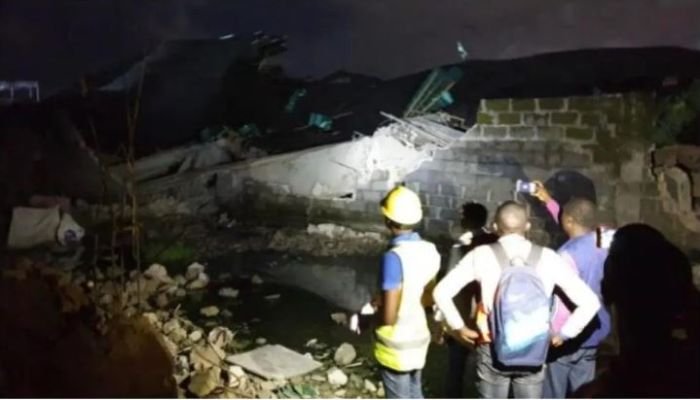 Many artisans were Friday evening feared killed after a building under construction collapsed in Lagos.

The incident occurred at 4:10pm around Glover Court Ikoyi.

It was gathered that the two-storey building caved in the course of decking the second floor.

Although the cause of the collapse was yet to be ascertained, sources said it could be as a result of substandard materials.

Chief Executive Officer of the Lagos State Emergency Management Agency (LASEMA) Dr. Femi Oke-Osayintolu said the number of persons trapped was yet to be ascertained.

“LASEMA has already activated the Lagos Emergency Response Plan for all first responders to move to the site of the collapsed building. Lagosians within the vicinity of the incident have been enjoined to stay calm and allow emergency responders to do their job.

“We are yet to know the number of persons trapped but I can tell you it was an uncompleted building and workers were on site,” he said.

Oke-Osayintolu also said that LASEMA and the Lagos State Environmental Protection Agency (LASEPA) have evacuated and disposed the rotten edible items found in five containers at Sifax, off Dock Nigeria Limited in Apapa.

He said the evacuation followed inspection of the containers after residents raised alarm of a stench and release of toxic gas into the environment.

The LASEMA boss said: “A joint action team comprising the DG/CEO LASEMA and GM LASEPA has conducted an on the site inspection of the containers. The joint team discovered edibles including fish which had become rotten due to faulty refrigerators.

“The absence of emergency action preparedness plan and appropriate safety measures in place to curtail such incidence and guard against reoccurence was observed.

“A total of 25 containers were located. Five containers laden with edibles have faulty refrigerators. The edibles have therefore defrosted and have become rotten causing severe health hazard to the environment.

“Thirteen houses are located on the street where the containers are located, leaving huge impact on house numbers 2, 4, 6 and 8 Trinity Close Apapa. LASEMA and LASEPA has evacuated and dispose the rotten items.”