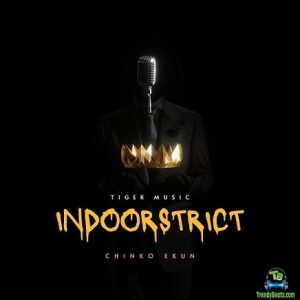 Chinko Ekun drops a challenge for a free verse for his new track titled Indoorstrict.

Prolific and talented Nigerian indigenous rapper and stage performer, Chinko Ekun unfolds a new masterpiece soundtrack tagged, Indoorstrict, to thrill the minds of his esteem fans after a long hiatus, in the music scene. The catalog was released in the year 2022.

Indoorstrict is a must-listen-to. Rapper, Chinko Ekun delivered tremendous flows and massive punchlines, displaying his vocal abilities and talent in the music business, which his audience will be pleased to hear.

The Ondo State-born music entertainer, Oladipo Olamide Emmanuel widely known as Chinko Ekun became a public figure in the year 2018 with his hit song named, ‘Able God’, together with Zanku Records boss, Zlatan, and Lil Kesh. It gained street credibility and fans fell in love with it.

Today, the 7th of December, 2022, the astonishing rapper and songwriter, Chinko Ekun update our playlist with this ravishing catalog tagged, Indoorstrict. Click below to download the instrumental.