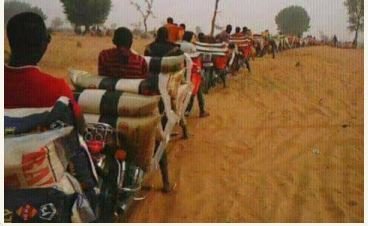 The Nigerian Customs Service Controller, Federal Operation Unit (FOU) Zone B, Kaduna, Mustapha Sarkin Kebbi, has disclosed the discovery of over 2000 illegal routes used to smuggle rice and other contraband goods across the Northern zone.

He said the customs lacks adequate manpower to cover all illegal routes at the same time, but that they were doing their best to ensure that no foreign rice gets into the country from those illegal routes.

Sarkin Kebbi said the policies of the federal government on rice production must be sustained by completely stopping smugglers from importing foreign rice and other contraband goods into the country.

The controller who spoke at a news briefing to highlight some of the achievements of his zone said the unit was working on the hinterland to be able to stop the smugglers. He explained that the ongoing border exercise has recorded successes since its commencement in August. “These means that the fight continues and by the grace of God, the Nigerian Customs Service and Nigerians will triumph at the end of the day.

We will make sure that smugglers that are trying to ruin our economy and security didn’t succeed,” he said. He listed some of the goods seized by his zone to include 25 vehicles, 703 bags of parboiled foreign rice, 530 jerry cans of vegetable oil, 245 cartons of spaghetti, nine bales of second hand clothing, 40 jerry cans of kerosene, a truck of PMS at the Kebbi border with 30,000 liters and 288 jerry cans of PMS in Katsina, Sokoto, Kebbi and Kwara states.

He said the duty paid value of the intercepted goods was worth N43 million, just as he lamented the porous nature of Nigerian borders particularly in the Northwest zone of the country. He said the smugglers usually monitor the movement of customs personnel but progress was being made in the fight against smuggling in the country.