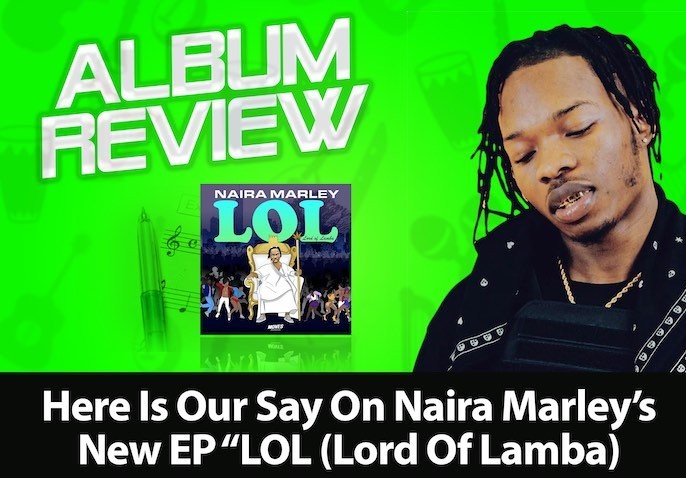 Sorry for keeping you guys waiting on our review on this Naira Marley’s new “LOL” EP.

But it’s better late than never!!!

Marlians Boss decided to wet the appetite of the whole Marlian clan with this EP in anticipation of his highly awaited Lagos concert tagged “Marlian Fest“.

And as we analyse this body of work, we will see whether indeed Naira Marley proved his Calibre and repute as “Lord Of Lamba“.

The song starts with synths playing, Vocals from N.M, followed by the heavy drum patterns well coupled together by the senior beatmaker, Killertunes.

As expected, this music contains explicit words from the “Ogologo” singers that many listeners might find offensive. The lyrics, organization of the song and vocals from C Blvck and Naira are slightly below average though.

Naira Marley seems to have a bank where he gets his slangs, Tingasa is a street slang probably invented by him.

But what’s the meaning of Tingasa???

Tesumole is the second track off the EP. The groovy sound was produced by Talented producer, Rexxie.

At first listening, I wasn’t swept off my feet by “Tesumole“, due to the similar tempo it has with “Soapy“, but as they say “Promotion Is The Key To Music Success”

When the Dance Promotion started for “Tesumole” then it started sounding like a Grammy-worthy tune to me. The virality has made it a generally accepted tune on the street.

Every club is currently jamming to right now, and its performance is definitely going to be a highlight at his coming concert.

“Eko dun ma bo ni le” is a Lamba on every streetizens lips at the moment.

The Young Jonn assisted tune is a very groovy and danceable song that was earlier released before Naira Marley conceived the idea of dropping an EP.

I must say, this is the first time I’m hearing a clean, smooth and properly mixed Naira Marley vocals. Mafo is a jam!!!

Another eccentric performance from Rexxie on the LOL EP. In as much as the song sounds like Kizz Daniel’s “Mama” it still has it’s own unique flavour.

Isheyen is also another song for the club and it has this ability to make you lose your home training whenever it comes up.

The song would have been the highlight of the project supposing it doesn’t have that same chord progression, drum pattern and vibe as Mama.

He tried to engage the talented marlians with this, but with Tesumole dance making wave I don’t think the challenge will be kickstarting anytime soon.

But apart from the challenge side of this track, that few Naira Marley’s lines were something Marlians will like too.

“Parental Advisory, explicit content” that should be the warning that comes up before the DJ sounds this song.

The synergy of the DMW act, Mayorkun and the NBG master was sublime on “Yanyanyan” coupled with the boppy beat cooked by Studio Magic.

Naira Marley dropped good vibes on this one, Mayorkun verse on the hook was lit.

Mayorkun vocals made the track interesting alongside his backups, some people might argue that Mayorkun verse was the best on the song

On his debut EP, Naira Marley was able to claim the throne of the Street Lamba Lord as purported by the EP title “LOL (Lord Of Lamba)”

LOL EP sees the curation of many Lambas, “Tingasa” being the popular many other due to its meaningless nature to many Marlians.
RATING

So Guys 👇
What Are Your Thoughts On The EP?