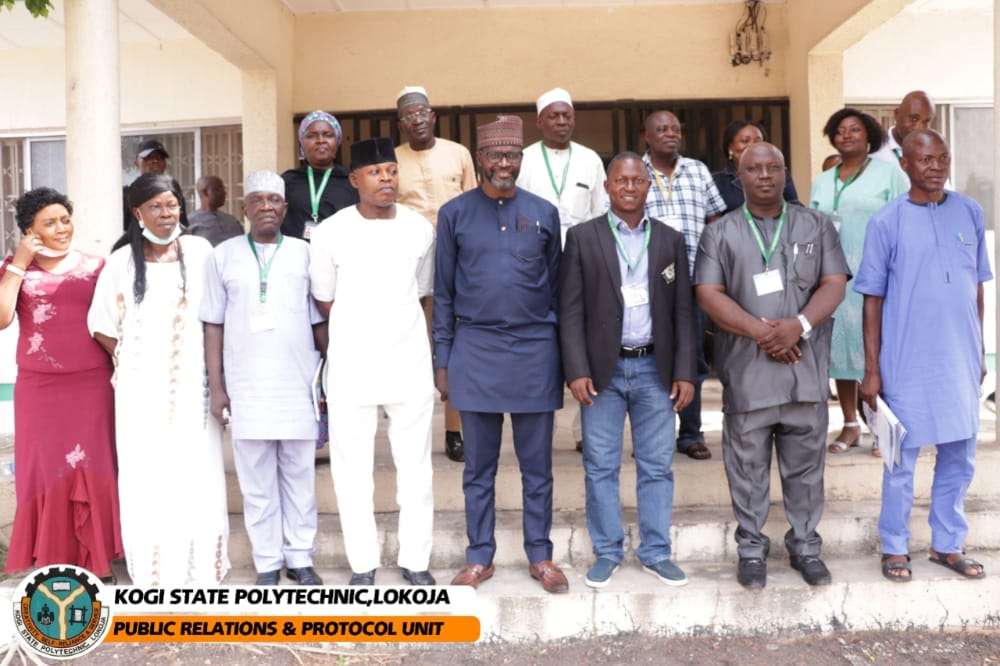 The Kogi State Commissioner for Science and Technology, Hon. Wemi Jones, has applauded the Acting Rector of Kogi State Polytechnic, Lokoja, Dr S.O. Usman, for the visible transformation initiatives recorded in the institution within a few months of assumption of office.

The Commissioner who made the commendation when he led officials of the Ministry on a visit to the institution on Tuesday, 14th July, 2020 said he had heard positive things about the Polytechnic since Dr Usman came on board, stressing that his visit had confirmed what he heard.

He stressed that such a landmark and within such a short period are a great testimony to the leadership qualities of Dr Usman, and urged him not to relent in doing more for the good of the institution.

Hon. Jones promised to table the challenges facing the institution to His Excellency, Alhaji Yahaya Adoza Bello, for appropriate action.

The Commissioner promised that he would do everything required by the Polytechnic until the desired result was achieved.

”I want to assure you that we would do our best to ensure that the school and education in the state is moved forward. We must as matter of urgency take education to the next level in Kogi State.

”The challenge of moulding the future leaders is from the foundation; we urge bigger institutions in the state to accept responsibility and take the matter very urgent”, he stressed.

He urged the Management of Kogi State Polytechnic to ensure that cultism is stamped out for good, in addition to ensuring proper discipline among members of Management and staff.

He called for punctuality and commitment to work so as to serve as good examples to the students.

He charged both the teaching and non-teaching staff of the institution to continue to support the Acting Rector to achieve greater things with good legacy.

Earlier, the Acting Rector of Kogi State Polytechnic, Dr S. O. Usman, commended the Commissioner for the visit, describing it as ”all important and memorable one”.

He explained that within his few months of assuming office, through team work, they had been able to resolve some lingering issues among the Management and staff of the institution, saying everybody now has a sense of belonging.

”We did the appointment of the Principal Officers seamlessly, as a true reflection of the ‘Ebigo’ agenda of His Excellency. In short, we have been able to carry everybody along.

”About 26 Committees had been set up which involved everybody including the students, and everybody in the institution is happy with it”, he added.

He added that they had also embarked on a number of projects, some on the verge of completion, and some on going.

This he said include a befitting Security Building, Medical Centre, School Beautification, among others.

He added that six projects sponsored by TETFUND had commenced in the institution.

He explained that the ongoing security building project was a joint and collective efforts of everybody in the school which had shown a sense of acceptability.

He noted that they had taken strategic steps to ensure adequate security in the school and its environ, and also put measures in place to ensure that the school get constant electricity.

”We are going to spend more on security to ensure adequate safety and totally eradicate cultism from the school in order to have an environment that is peaceful for learning.

”We have put all our ideas in place, and all we need from the Government is motivation and support for us to succeed,” he said.

He, however, noted that the major challenge of the institution, was the encroachment on the school land, and appealed to the State Government for intervention in reclaiming those land.

He added that another major challenge was the low level of ICT education for staff, which according to him required funds to carry out training for the staff to be ICT compliance.

He further requested for the support of the State Government for the construction of flyover bridge in front of the school to ensure safety of staff and students of the institution.

He commended the Governor for considering him fit to be appointed, and promised never to let the governor and the good people of Kogi State down.

It would be recalled that the State House of Assembly Committee on Education, Science and Technology, led by its Chairman, Hon Kilani Olusola Olumo had paid similar visit to the institution about a month ago.

They equally commended the development initiatives of the Acting Rector and promised to assist in moving the institution forward.