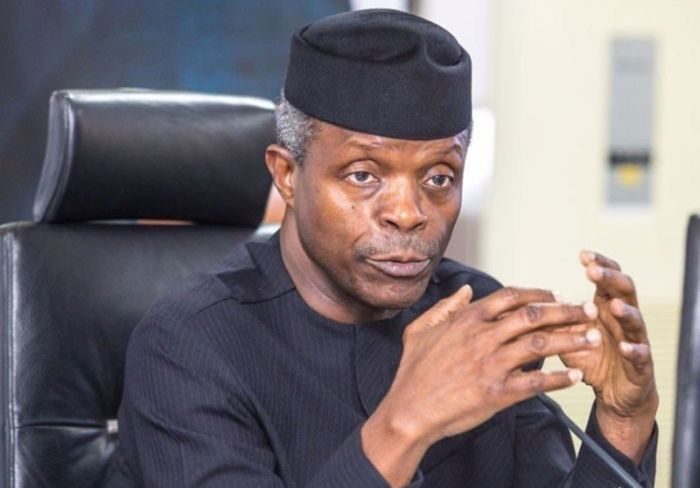 • I will waive immunity to clear my name, says VP

• Vows to prosecute Frank, Ononuju for peddling ‘falsehood’
• Media house retracts story on alleged corruption
• Lawyers differ over renunciation of legal protectionThe ongoing controversy surrounding the office of Vice President Yemi Osinbajo over an alleged strained relationship between him and his principal, President Muhammadu Buhari, took a new dimension yesterday when the former in a statement declared his readiness to waive his constitutional immunity to “enable the most robust adjudication” of several baseless allegations, insinuation, and falsehoods against his person and office.Last week, Buhari set up an Economic Advisory Council (EAC) which, according to a statement from by his media aide, was to replace the Economic Management Team (EMT) headed by Professor Osinbajo with directives that members of the newly created body would report directly to the president.The decision, which was given several interpretations, suggested that Buhari in collaboration with the ‘cabal’ might have made up their mind to frustrate the vice president or force him to resign.
Osinbajo has also recently been accused of mismanaging N90 billion, being funds allegedly provided by the Federal Inland Revenue Service (FIRS) for the prosecution of the general elections.

But Osinbajo, in a tweet personally authored yesterday and made available to the media by the Senior Special Assistant to the Vice President on Media and Publicity, Mr. Laolu Akande, said: “In the past few days, a spate of reckless and malicious falsehoods have been peddled in the media against me by a group of malicious individuals.

“The defamatory and misleading assertions invented by this clique had mostly been making the social media rounds anonymously.

“I have today instructed the commencement of legal action against two individuals, one Timi Frank, and another Katch Ononuju, who have put their names to these odious falsehoods.

“I will waive my constitutional immunity to enable the most robust adjudication of these claims of libel and malicious falsehood.”

However, Osinbajo’s plan to waive his immunity is generating reactions, with some Nigerians asking if he has the constitutional right to do so.

Chairman, Presidential Advisory Committee Against Corruption, Prof. Itse Sagay, described the resolution as a serious and intricate question because it is a constitutional matter.

He said the vice president does not have the capacity as an individual to waive his immunity. “However, this shows Nigerians that Osinbajo is clean from all the allegations against him. He has no skeleton in his cupboard. I can personally swear on his behalf that he will not tamper with the public fund but will rather use his personal money for the good of Nigeria if the need arises.”

In another reaction, a former Minister of Information, Prince Tony Momoh, who is also a lawyer, said the vice president has no constitutional right to waive his immunity as far as Section 308 of the 1999 Constitution is concerned.

According to Momoh, “Osinbajo has no right to waive his immunity except he resigns from office or if he is impeached. My advise to him is to allow those who made the allegation to go and prove their case in the court. As a public officer and politician, he should develop a thick skin to accommodate all forms of criticism. I don’t think he can waive his immunity without resigning from the office. But as long as he is doing well, we will encourage him to continue offering his good service to the country.”

A professor of History and Strategic Studies, Ayodeji Olukoju, told The Guardian that even though the constitution does not allow the vice president to waive his immunity, “if the man feels strongly to defend his integrity, he should be given the opportunity. This shows the premium he places on his integrity, which to me he values even more than the office he is currently occupying. This is an indication of his readiness to sacrifice his position to clear his name, which is very rare in Nigeria or among our public officers.”

Olukoju also commended the vice president’s courage, saying that he has raised the bar in terms of governance and integrity. He added that if the decision to waive his immunity is unconstitutional, Nigeria should make it a convention henceforth that if allegations are weighty, public officers should waive their immunity if they wish to clear their name and integrity.

According to the don, “What the vice president has done will introduce a new dimension of discipline in Nigerian politics and democracy.”

But sharing a different opinion, factional chairman of All Progressives Congress (APC) in Lagos State, Mr. Fouad Oki, said it is within the ambit of Osinbajo to waive his immunity if he feels strongly that his name and integrity are at stake.

In a telephone conversation with The Guardian yesterday, Oki said: “Since Osinbajo is a beneficiary of the immunity clause, he also has the right to waive it to prove his integrity. This has shown that he is a honourable man who is above board. It shows a lot of guts and courage on his part. I hope other politicians and public officers like him will follow his example. We support his decision, not because he is Yemi Osinbajo but because his action represents the Nigeria of our dream.”

Osinbajo’s travails might not be unconnected with the struggle for power among southwest political gladiators ahead of the 2023 elections. The rising profile of the vice president and his acceptability in the north in recent times is said to be creating confusion in some camps that have vowed to bring him down.

Nothing exposes the fact that Osinbajo is not a politician than the recent decision to announce his resolve or preparedness to waive the constitutional immunity conferred on his office in a bid to regain his credibility in the face of allegations of purloining campaign funds.

As a lawyer and pastor, Osinbajo seems not to have come to terms with the knife fights in Nigerian politics. As such, by joining issues with those who flew the kite about his current travails with the famed presidency cabal on the claim of unaccounted campaign fund deployment, he fell into an ambush.

Despite the alleged imbalance in the use of the campaign fund believed to be from the Federal Inland Revenue Service (FIRS), the vice president should have known better that as sociologists say, scandal improves by refutation.

But jumping the gun to extricate himself from the messy tales, the law professor will be surprised by other details that have been making the rounds in hushed tones.

Now having been boxed into a corner, the vice president will begin to confront his travails all alone because Asiwaju Bola Tinubu, who should have taken up the fight, allegedly has some misgivings about him too, The Guardian has learned.

It is alleged that Osinbajo, at the height of his efforts to distance his political progression from Tinubu, claimed at one point, “somebody somewhere nominated me as running mate to Buhari.”

Apart from that, sources said it was allegedly the vice president’s covert plot to use the Alliance for New Nigeria (ANN) as a possible platform for his 2023 presidential ambition that threw some ice on his relationship with the former Lagos State governor.

While the vice president was said to have worked in cahoots with the very cabal that is currently going for his jugular to ensure that ANN was put beyond Mr. Gbenga Olawepo, Tinubu was informed about that scheme.

Moreover, the fact that the sum of N500 million was allegedly moved into ANN’s account from the presidency to engineer the quiet takeover of the party, seemed to have convinced Tinubu that the vice president was not being frank to him.

In his home state of Ogun, at the peak of the supremacy battle between former governors Ibikunle Amosun and Segun Osoba, Osinbajo was said to have adopted the ostrich style by refusing to back Osoba or Amosun.

But while he was adopting the non-aligned posture in the southwest caucus of the All Progressives Congress (APC), Osinbajo was made to walk a tight rope in the presidency.

Sitting at the head of the committee that investigated former Secretary to the Government of the Federation (SGF), Babachir David Lawal, the vice president refused to use “the eyes of an elder” to view the case against Buhari’s Adamawa-born ally.

Although the indictment of former Director-General of National Intelligence Agency (NIA), Ayo Oke, was meant to uphold Osinbajo’s impartiality, at the end of the day, the cabal reportedly held the fall of Babachir against him.

Again, the duo of Chief of Staff Abba Kyari and Babagana Monguno were said not to be impressed with the way Osinbajo capitulated to the intrigues in the Adamawa chapter of APC, which led to the fall of Babachir.

In other reactions by legal minds on Osinbajo’s willingness to waive his immunity, Lagos-based attorney, Nwachukwu Odoemela, said: “I wonder how the vice president can achieve this tall height. Would I say that he wants to surrender himself in the face of the constitution or is the vice president calling for an amendment to Section 308 of the constitution? He cannot waive the immunity granted to the executive as mentioned by Section 308 unless there is an amendment to the Section. His best bet is to tender his resignation from office and surrender himself to law enforcement agents.”Lagos-based lawyer, Ikemesit Effiong, said: “The simple answer is no. It will take a very creative interpretation of the constitution for him to ascribe and waive immunity.”Owerri-based lawyer, Ike Augustine, noted: “It is pertinent to distinguish between private rights and rights of interest to the public. As a person can waive a right conferred upon him by a statute, so also he can waive his constitutional right. The court thus recognises the difference between purely private rights and rights, which though conferring benefits on litigants, are also of interest to the public.”

The managing partner, The Law House, Lagos, Theophilus Orumor, said: “Immunity does not stop the investigation. It only stops the prosecution. He cannot waive his immunity. There is no constitutional provision for this under the CFRN 1999. If he is so serious and insistent, then he can resign his position and be subjected to prosecution.”

Abuja-based legal practitioner, Dr. Agada Elachi, said: “There are no precedents for such waiver.”

Olumide Braithwaite, a lawyer, and son of former legal activists,’’ Dr. Tunji Braithwaite, noted: “This issue of institutional immunity is long overdue for a challenge. The office of the vice president also serves up a tasty discourse, as it is constitutionally the second office to the president of the federation.”

Lagos-based human rights activist, Inibehe Effiong, said: “Based on the extant constitutional regime, the vice president cannot waive his immunity. The Supreme Court decided in 2001 in the case of Tinubu v. I. M. B. Securities Plc that the constitutional immunity under Section 308 of the Constitution cannot be waived by the persons to whom the provision is meant to protect.”